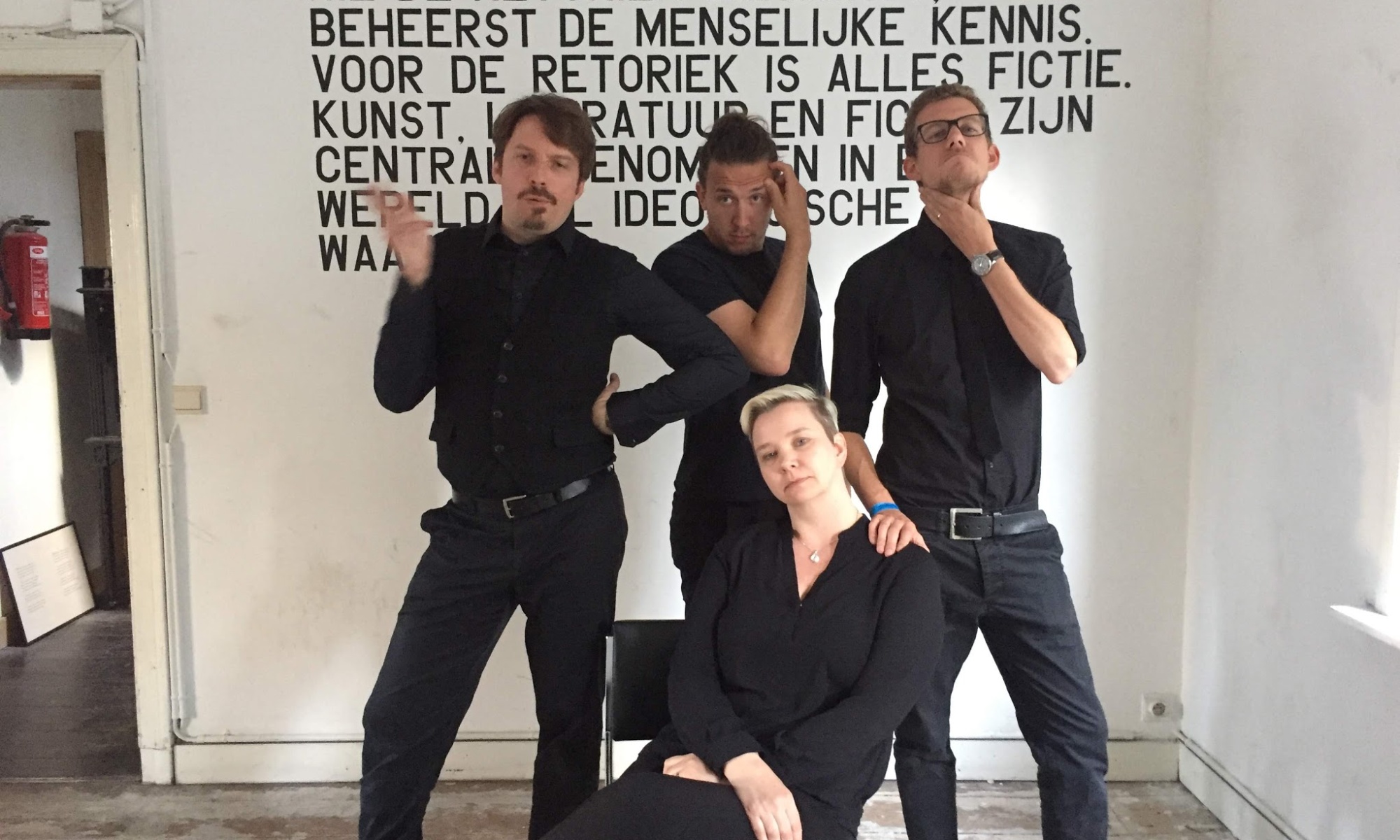 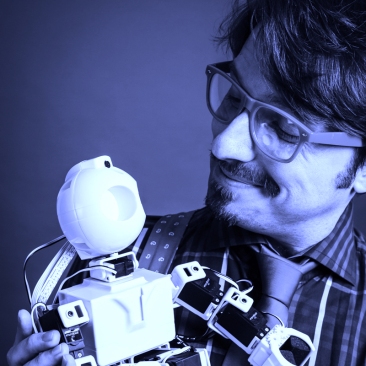 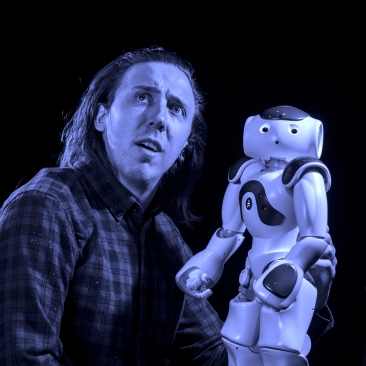 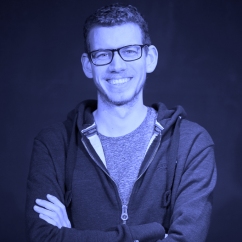 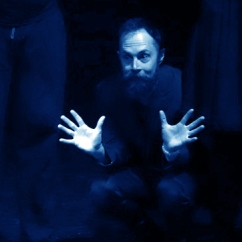 Kory Mathewson (Improbotics Canada), a Canadian Comedy award-winning improviser, has trained at Rapid Fire Theatre (2005-present). Kory presented TEDxRFT alongside Julian Faid at the Seattle Festival of Improvised Theatre, Austin’s Out of Bounds Comedy Festival, and was recently awarded “best of fest” at the Vancouver International Improv Festival. An endurance improvisor at heart, he has starred in multiple 50-hour Edmonton and London Improvathons (2012, 2016). He has performed and taught Theatresports and long-form narrative improvisation across Canada, the United States, and Europe at the Montreal Improv Festival,, the Bellingham Improv Festival, Rapid Fire Theatre’s Improvaganza in Edmonton, with Outside Joke’s main season in Winnipeg, and served as 2014 Artist-in-Residence at the Curious Comedy Theatre in Portland, Oregon. Kory is an innovator in the art form of improvisation, bringing new techniques and formats inspired by his work in cybernetics and artificial intelligence. He just finished a PhD in Computing Science at the University of Alberta, with a thesis on “Humour-in-the-loop: Improvised Theatre with Interactive Machine Learning Systems”.

Piotr and Kory are co-creators of arts and science collective HumanMachine and of robot-based improv comedy: Artificial Intelligence Improvisation.  They have been improvising together on Human Machine since 2017 and have performed, remotely and on the same stage, at ImproFest UK 2017, Brighton Fringe Festival 2017, Camden Fringe Festival 2017, and Edinburgh Fringe Festival 2017. Their work has been credited in Avenue Edmonton, The Sunday Times, Canadian Television, RTE One, Bloomberg Business, Inverse and a feature in the New Scientist.

Jenny Elfving (Improbotics Stockholm), is a Swedish actor, improviser and playwright, who trained at Boulevardteatern, Stockholms Improvisationsteater, and Västerbergs Folkhögskola. Since 2011 she has taught numerous improv classes at Stockholms Improvisationsteater, International Theater Stockholm, and Improvisation & Co. As a member of the independent improv group Dramatiska who focused on dramatic genre based longform, she has co-produced and performed in Improvised Tennessee Williams, Improvised Ingmar Bergman, Improvised Woody Allen, Improvised Hitchcock, and the smash hit that played for a full house for 5 seasons: Improvised Roy Andersson. With Dramatiska, she performed at the New York City Improv Festival 2013, SWIMP 2017 and Best of Stockholm 2017. She is also the founder and producer of the improv group Hybris, which performs frequently in Stockholm and is known for their modern Impro-Flow concept. Jenny has also played 7 seasons in the improvised children’s show Sagogrottan, co-founded the experimental group Achtung Impro in 2017. She is currently directing her own play Invulnerable at Teaterstudio Lederman.

Ben Verhoeven (Improbotics Flanders) is a Belgian science communicator and improviser. He has a strong scientific background as PhD in Computational Linguistics and has let improvisation take over his life ever since. In his own company ERLNMYR, he performs improvisation shows about science (Hoofdstof, Improbotics, Full STEAM Ahead) and provides applied improvisation training to scientists. He is the co-founder and managing director of Swaajp Improtheater in Antwerp. They perform regularly in English and Dutch and have their own Swaajp School of Improv in which Ben is a teacher. As a member of Commotie — musical improvisation — he won the Kemphanen competition for best long-form improvisation show in Flanders in 2017. He also travels to international improv festivals to take workshops and masterclasses, to see shows, to teach, but also to perform with — for example — the Dutch-Belgian ensemble “Werewolves, the improv show” which he co-directs. He is also active in his new trio Prism, and the Brussels-based group ImproBubble. As a passionate organizer he is also a founding member of The SIN — an international network of ambitious improv players and organizers in Europe.

Boyd Branch (Improbotics London/Online) is a communications and digital media expert focused on creating dialogue around subjects of science in public spaces through improvisation, technology and theatre. A former Fulbright fellow, Branch’s critically acclaimed art, designs, lectures, and workshops have been produced off-off-Broadway and major cities in the U.S., England, Colombia, the Netherlands, and Pakistan (sponsored by the US State Department). A multidisciplinary artist and dedicated educator, Boyd has designed stereoscopic 3D media for planetariums, large scale architectural projection for festivals, interactive digital installations for museums, and presented his original improv focused science communication workshops at major science conferences and science communication institutions around the world. Most recently Boyd was awarded a Vice Chancellor Fellowship from the University of Kent to develop a series of digital media tools that will help scientists and science communicators more effectively engage with local communities. At Kent he also directs the Improvisational Media and Performance Lab, leading a cross disciplinary team in developing novel tools, experiences, and pedagogies for fostering adaptive radical social change. He is the co-founder of the Blue Bike Kid Show, which produces original STEM based material for the stage and web. He holds an M.F.A. in interdisciplinary digital media from Arizona State University, and an M.A. in theatre studies from the University of Utrecht in the Netherlands.

We have received extensive advice and support from Adam Meggido and been coached by Chris Mead and Katy Schutte,

Etan Muskat, trained at Second City Toronto and Artistic Director of Bad Dog Theatre, has created in May 2017 a show called “Yes, Android“, featuring an improv cast where one of the improvisers was reading lines generated by a chatbot.